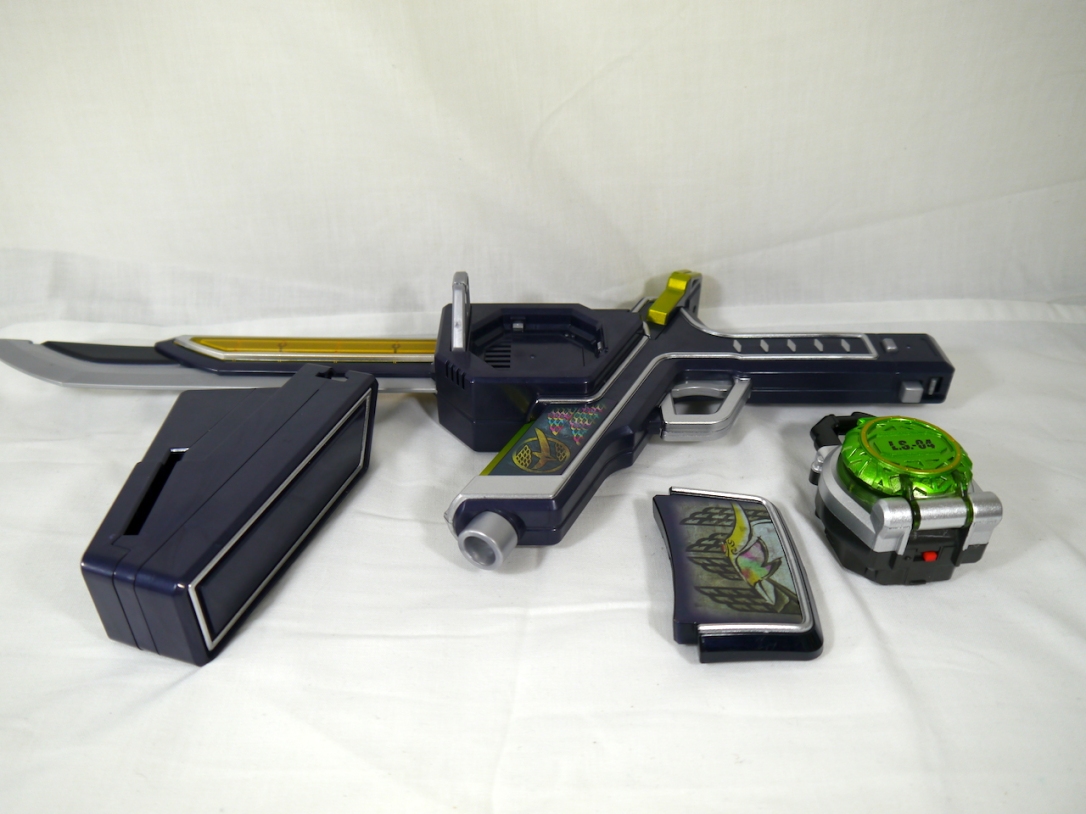 Lock On! Get your Musou Saber from CSToys International!

The Musou Saber is the sidearm weapon of Kamen Rider Gaim and Kamen Rider Zangetsu. It’s basically a pistol like weapon with a big blade attached to the top of it. Not sure how that ties into everything, but it’s cool regardless. On its own the Musou Saber plays two different slashing sounds. When the back lever is pulled, it converts to being a gun, firing four rounds before being out of ammo. Shortly after running out of ammo, the toy will convert back to sword sounds. Insert a Lock Seed to hear the toy chant “Ichi, Jyuu, Hyaku!” Press the trigger to hear “____ Charge!” and a strong attack finisher. After the countdown, you can also pull the back lever to do a gun mode finisher. After the finishing attack, you can press the trigger in either mode to hear “____ Power!” followed by the generic attack sound. The Musou Saber can also attach to the Daidaimaru to form a naginata weapon. When a Lock Seed is inserted here, you hear “Ichi, Jyuu, Hyaku, Sen, Man!” followed by “____ Charge!” and an even stronger finishing attack. This mode does not have a gun finisher. Included is the Melon Lock Seed, Zangetsu’s main Lock Seed. As with any Lock Seed, press the back button to hear Inves Game noises, and pop it into the Sengoku Driver to hear the multitude of sounds the toy has to offer. Also shown off in this video is the promotional Zangetsu Faceplate. The faceplate acts the same as Gaim’s faceplate (which is the same as no faceplate) to hear the Japanese style music in the Sengoku Driver. It adds no functionality you don’t have already, but it does complete the main four, and look nice and accurate for you Zangetsu fans. This was only given out over a span of time in November, 2013 while supplies lasted when you purchased any qualifying Kamen Rider Gaim toy. Nowadays, the only way of getting the faceplate is through secondary markets like Mandarake, Yahoo Japan, or eBay. Overall, the Musou Saber is a fun weapon with nice functionality with the Lock Seeds. Given the size, it’s a bit of a turn off for adult collectors, but if you can look past the size, it adds another level of fun to your Lock Seed Collection, and looks great on display with the Sengoku Driver and Lock Seed Holder. Worth the pick up on sale.