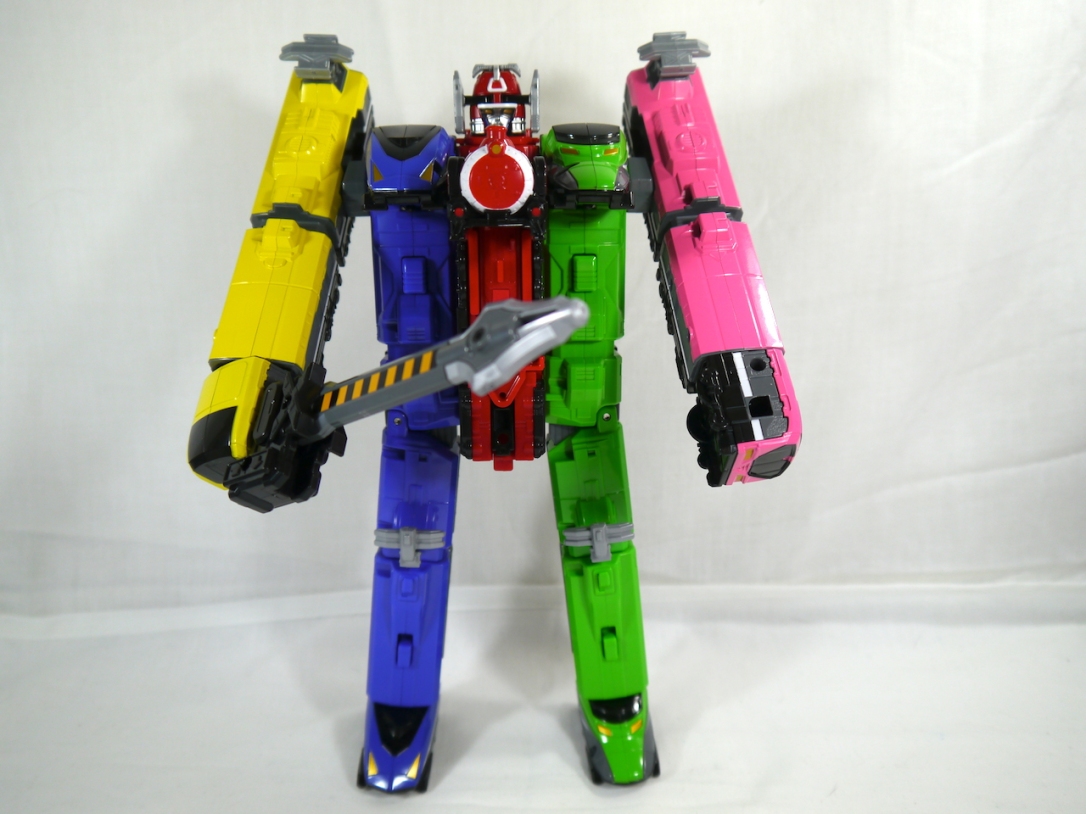 All aboard the Rainbow Line! Each of the ToQger’s Ressha merge to form the powerful ToQ-Oh, a big mass of trains, color, and imagination! ToQ-Oh was available at the show’s premier in February, 2014 for around ¥7,200, depending on retailer. ToQ-Oh is also available in a set with the ToQChanger for around ¥11,000 or so. Each train is actually incredibly long, being comprised of the Ressha itself, along with a back carriage that eventually forms ToQ-Oh’s base body. Each train has a hole in the front, and a fold out connector on the back to connect them together (just like actual toy trains do) to form a train over 1.2m long! With more and more Ressha announced for this line, it’ll be fun to see how long our train gets by the end of the show. Likewise, if you pop off the individual Ressha from the full train, you can connect those as well to form a smaller, more mobile train. Each Ressha can be inserted into the ToQChanger to transform into that ToQger, or to transfer into a different color. It’s really neat that the gimmick and mecha for this line are so intertwined, and are virtually the same thing. As more Ressha are released, you can swap Ressha to make new forms of ToQ-Oh. Transformation is simple, but insanely fun to do. The end product is…odd. While it was very off putting at first, holding it in your hand, it really does look really great, and I can’t help but love it. The color is a lot at first, but given the theme of the show, it’s something I accept and have actually learned to love. While he’s rather pricy given he has no electronics like Kyoryuzin did, and he’s quite a bit thinner, it’s hard to justify his cost. However, the end product looks neat, plays well, and is just all around a lot of fun. If you can pick up this guy at a discount of some sort, he’s a really fun toy that any fan of trains will get a kick out of. I can’t wait to see what else this line has in store.