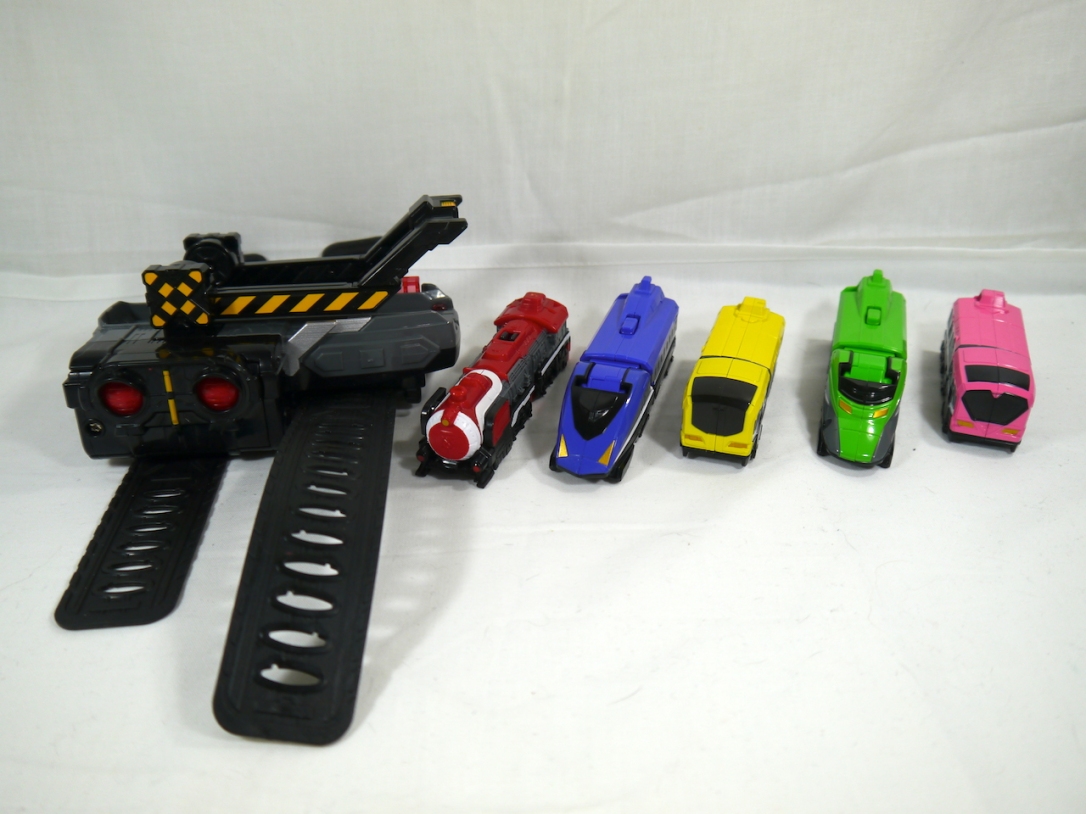 The ToQChanger is the device worn by the five main ToQgers! By inserting a Ressha into the device, they can transform into a ToQger and help fight the Shadow Line! The ToQChanger was released when the show started in February, 2014 for ¥3,900. When you buy the changer individually, you also receive a Red Ressha. This Red Ressha does not feature the same ports or movement the one on ToQ-Oh does, and is closer in line with the upcoming Candy Toy and Capsule Resshas. If you buy the two pack with ToQ-Oh and the ToQChanger, you DO NOT receive this Red Ressha, and are forced to use the Ressha included with ToQ-Oh. Anyway, the features are relatively simple, but that doesn’t stop it from being awesome. Insert a Ressha to hear it announce the name of the Ressha. Press the first button and insert a Ressha to transform into the associated ToQger (Red for Ichigou, Blue for Nigou, Yellow for Sangou, Green for Yongou, Pink for Gogou). With a Ressha inserted, you can also press the last button to summon that Ressha, each with a cool unique noise. The main feature of the toy lies in the middle button, which activates the “norikae” which is the Japanese word for transferring trains or busses or anything like that. Remove the Ressha, and insert a new Ressha to transfer into that color Ressha. For instance. ToQ Ichigou Red can transfer into ToQ Ichigou Pink by removing the Red Ressha and replacing it with the Pink Ressha. This can be done with any of the five ToQger, into any of the other colors, and can be done as many times as you want! Norikae can even be done with the auxiliary Ressha like Shield or Scope. The playability levels of this toy are beyond limitless. With all the Ressha coming out, between the transformations, transfers, and summoning of the Ressha, there’s a lot to be had in such a small device. To top it off, Bandai really upped the game on their straps. I have a rather thick wrist, and can wear the changer no problem, and I’m not even at the final setting. Pretty much anyone should be able to wear this! I see very little WRONG with the toy itself. However, I really wish it came with watered down versions of all five Ressha. Considering the entire point is to use the norikae function, only including the Red Ressha forces you to either buy ToQ-Oh (which is a genius marketing move) or wait until April when the Candy Toy and Capsule Ressha start to hit. Both moves alienate certain collectors, and even certain kids, which I think is a little bit of a shame. That being said looking at the base functions of the toy, it’s really awesome, and sure to be a hit.