Nerd Block is a monthly subscription service from the people behind ShirtPunch. Each month, for only $19.99 USD, you receive a box containing a T-Shirt, along with four to six collectibles from a variety of franchises that people love. For you horror genre fans out there, Nerd Block has started the Horror Block, a different $19.99 box that focuses strictly on top horror franchises. Finally, available for the younger is the Nerd Block Jr. for both boys and girls, for $13.99. The Nerd Block Jr. doesn’t have a shirt, but contains a few extra toys, and focuses on kids franchises like My Little Pony, Pokémon, Skylanders, etc. Both are great values, and you always receive more than what you pay for. The fun is in the surprise!

Contents of June 2014’s block, as well as my unboxing video are after the jump.

June’s box brought a things from franchises I love! In total, I received: 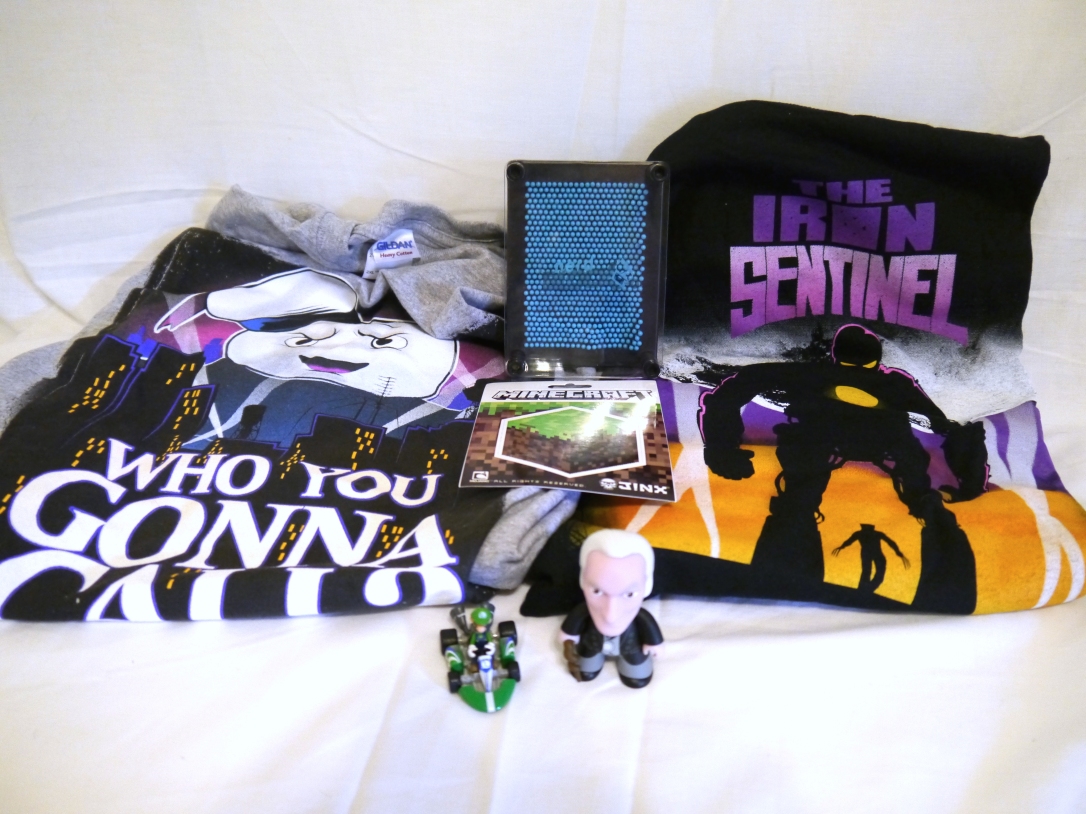 At the core, this box may seem very lackluster. Only four items, and one of them is stickers? While that’s certainly true, this month was Nerd Block’s first “Double Shirt Month.” This means that your $19.99 plus shipping gives you TWO T-Shirts. Considering ShirtPunch prices are around $10, your box is paid for already. While I really wish one more goodie was in the block, what did come with it is really cool for me. Mario Kart 8 just came out, so a cool little Mario Kart Wii car is neat, especially of my favorite Mario Bro. I’m a huge Who fan, so getting one of the Titan Vinyls I love so much was another great bonus. The Minecraft stickers I don’t really care about, but I know enough Minecrafters to dump them on someone. While there wasn’t as much umph to the toys in this box, the double shirts were great. I like X-Men and Ghostbusters enough to really dig these shirts. The previous two shirts I’ve got were a little more my thing, but I like both those franchises enough to really dig it. All in all, it was a good block this month.

As always, these aren’t for everyone, but if you’re willing to dish out about $30 a month for a surprise box filled with a bunch of neat (and possibly exclusive!) items, then this is a great thing to do. If you’re a horror fan or have children you want to share the experience with, be sure to check out the Horror Block and Nerd Block Jr. subscriptions as well. These things are really fun to me, and I look forward to next month’s Block.