The Super Mega Cannon is the big final weapon of Power Rangers Super Megaforce, modeled after the Sky Ship. It was released in the deluxe weapon assortment (similar class as the Samurai Mega Blade and such) for $29.99. At the time of this posting, it’s only been spotted on Amazon.com and Toys R Us. As with most toy cannons, press the trigger to hear one of two attack noises that seem to cycle in a 1-1-2 pattern. The noises basically sound like Pac-Man coming out of a gun. A Ranger Key can be inserted and turned on the back of the cannon to initiate a final attack sound. Just like in the show, the other 4 Rangers’ Ranger Keys can be inserted on the base of the cannon. This however doesn’t do anything, or change the functions of the toy at all, and is simply decoration. Realizing that noise-making guns seem to be selling less and less these days, Bandai America decided to add a little bit of functionality to this toy by making it capable of firing blue disks. The disks are propeller shaped, and fly through the air relatively well. Each has a suction cup on the end to stick to a surface, which I’ve actually had happen multiple times. Two disks can be attached to the cannon at a time. You can either spin them manually, or you can set them up, and pump the black handle back and forth several times to wind up the launchers. Press the trigger to watch them fly. Like I said, the feature actually works surprisingly well, and is super fun. Both my dogs and my cat like chasing them when I launch. Plus it’s fun to shoot at the wall and stuff. Aiming two disks simultaneously is near impossible, but it’s a fun thing nonetheless. Included is a Samurai Red Ranger Key. Everyone assumed it would Lauren thanks to promotional pictures, but it’s of Jayden instead. For the price, This is actually a pretty nice toy. The size is decent, the sounds are pretty fun to laugh at, but the disk firing gimmick is actually loads of fun. Kids will love it. Collectors, it’s really up to you guys. 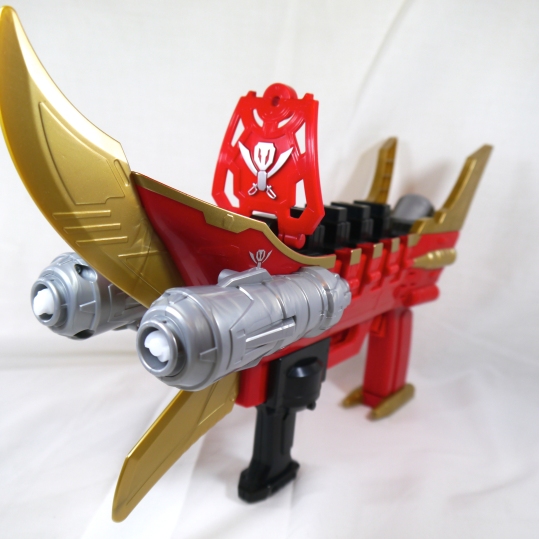 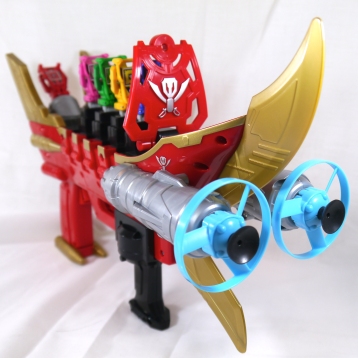 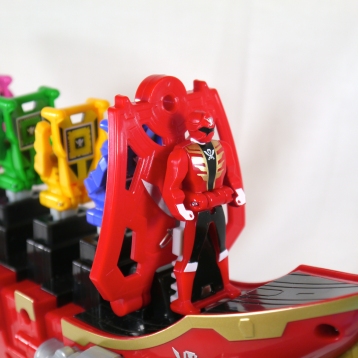