Loot Crate, like Nerd Block, is a monthly subscription service. For $13.37 per month (get it? 1337. INTERNET JOKES!) plus $6 shipping (with three and six month plans as well to save a little money) you receive a box filled with a number of themed “geek and gamer” items supposedly retailing for over $40. Shirts CAN be included, but aren’t necessarily included every month. When they are, the print is exclusive to Loot Crate and can be found nowhere else. Loot Crate also includes a collectible pin and book detailing the theme. The book also has articles and interviews related to the theme as well. Each month carries a specific theme that usually matches something happening in pop culture. For instance, one month was “Titans” dedicated to items based on Attack on Titan and Titanfall. When the Xbox One and PS4 were releasing, the box was “Console Wars.” It’s actually pretty neat. Like Nerd Block, Loot Crate selects one subscriber to receive the “Mega Crate” containing over $750 worth of prizes. While you never really know what’s inside, the franchises are usually easy to guess based on the theme and hints dropped by the Loot Crate crew.

Contents of August, 2014’s Loot Crate, as well as my unboxing video are after the jump. 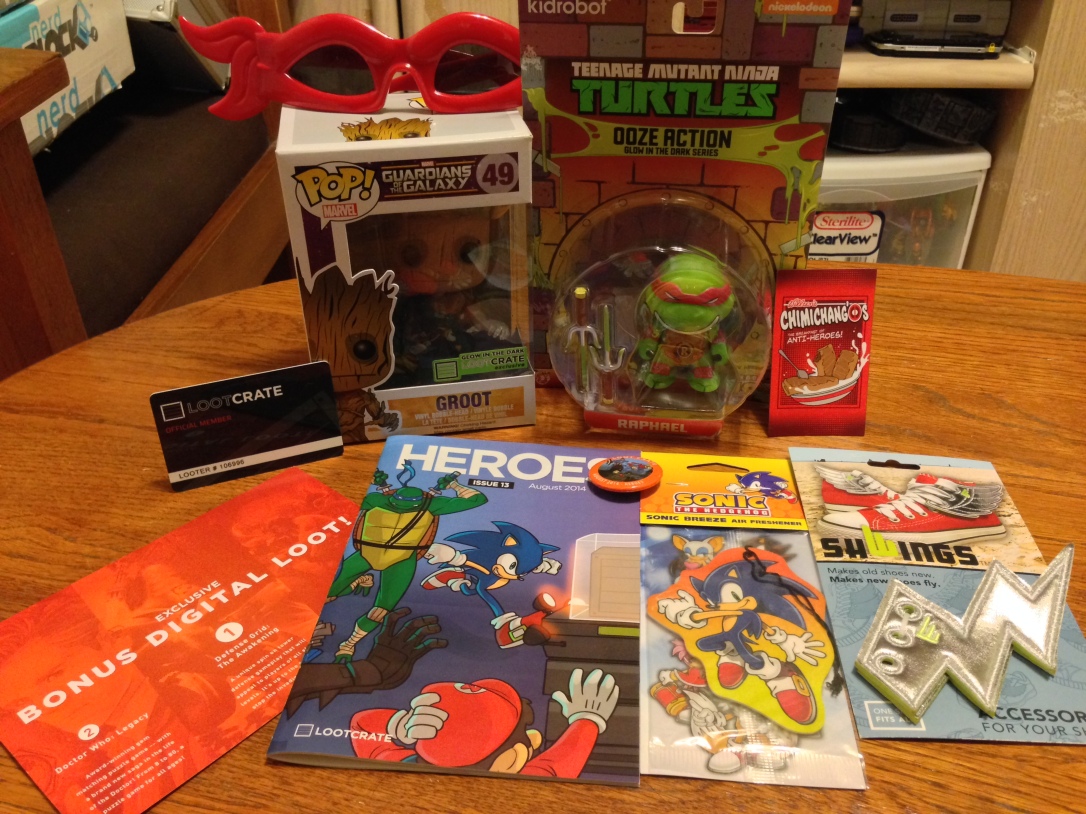 I love this Crate. LOVE. I knew Heroes was going to be a good theme, and with so many cool hero movies out, I knew it was going to cover stuff I liked. While I could care less about “Shwings,” or the Deadpool magnet, and I am still incredibly bitter that I didn’t get a Mega Man Air Freshener, the rest of the crate was pretty ace. I love the sunglasses! I can’t wear them, but it’s just one of those cool things to have. As I mentioned in the video, I already have a Kidrobot Raph figure and keychain, so getting the Ooze Action one is incredibly fitting. Finally, the Groot figure is just great. I loved Guardians, and Groot was my favorite. It’s great to have an exclusive of one of my favorite characters. The membership card is a nice bonus too, not that I really need it. It’s just something neat. Overall, this crate was simply one of the best.

As with Nerd Block, these are NOT for everyone. While it’s easy to peg what franchises are included based on the theme and images, the items you are getting are still random. However, at only $13.37 before shipping, the price is a bit easier on the wallet (plus shipping is $4 cheaper than Nerd Block thanks to Loot Crate being US based). Plus when you get a crate with a shirt included, the deal is just unbeatable. Really a great deal.