Contents of November 2014’s box, as well as my unboxing video are after the jump. 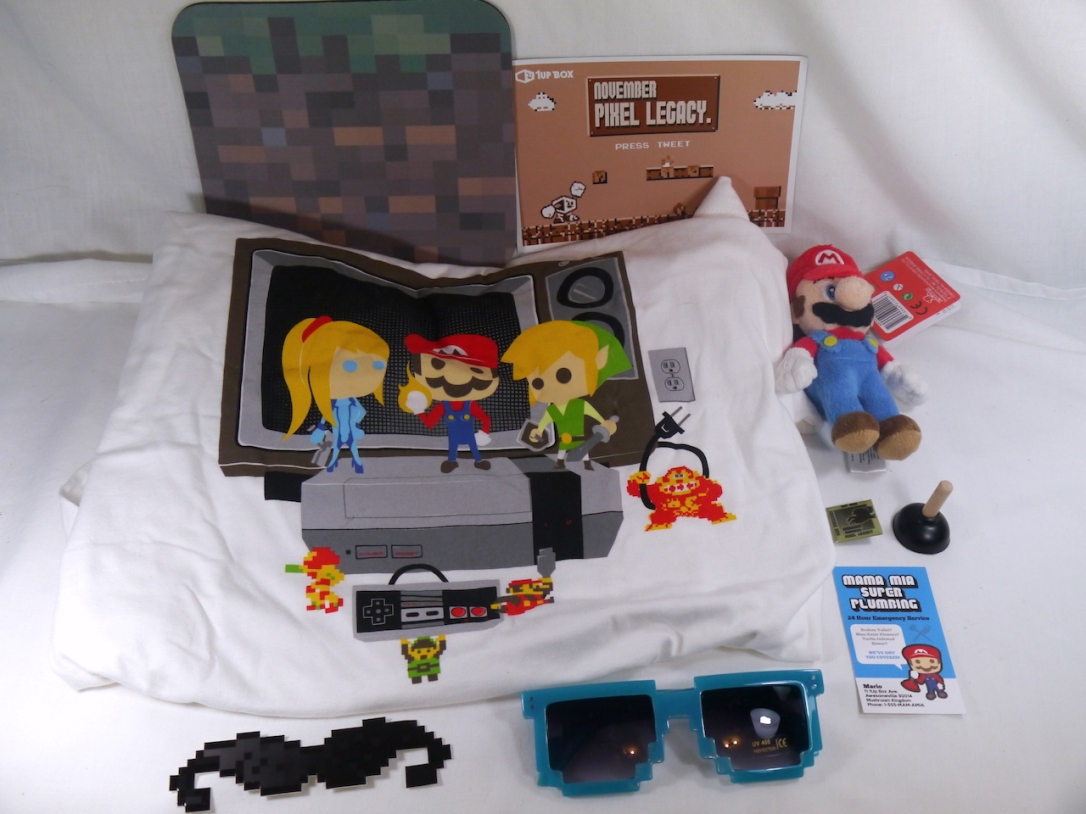 • “The 80’s Pixel Veteran” T-Shirt
• 5″ Mario Keychain Plush
• Minecraft Pixel Terrain Mouse Pad
• Pixel Shades
• Paper Luigi Pixel Moustache
• Mini Home Plumbing Kit (Phone Stand & Business Card)
• Pixel Legacy Theme Card
• Pixel Legacy Theme Pin
I am big into retro gaming. I love the newer titles, but there’s always a bit of joy when I sit down and play NES or SNES titles. As such, I knew Pixel Legacy was gonna be a hit. While I ultimately think things could have been pulled off a little better, it’s definitely unique. The plush keychain is currently hanging on the wall of my bathroom, and is probably my favorite item in the box. I don’t like Minecraft, so the mousepad is gonna make a nice Christmas gift for my girlfriend’s niece, who does. The shades are actually really cool. Geeky, but cool. The moustache I could do without. I still don’t see a sticker anywhere, so I don’t have any way of getting it on my face. I’ll go tape it to one of Cat’s Hello Kitty plushes and see if she notices. While my iPhone 6 Plus is ultimately too big to effectively use the plunger stand, it’s still a really cute concept. The business card they made to go with it is really neat too. Finally, the card and pin for this month are ace. Let’s talk about the shirt. I LOVE this shirt. I’ve gotten a lot of great shirts from these boxes, but this is probably my favorite of the bunch. Even though I’m not a fan of white shirts, the art is just really neat. Zero Suit Samus, Mario, and Toon Link standing on top of the NES, with their 8bit versions bouncing below. Meanwhile 8bit Donkey Kong is over being an asshole and unplugging the TV. Regardless, the design is adorable, and the shirt alone is worth the price of admission. Great job guys.
As with any of these subscription services, they aren’t for everyone. However, 1Up Box is currently the cheapest box on the market at only $12.92 before shipping. While you don’t get as much as you would in a Nerd Block or Loot Crate, you still more than get your money’s worth. In essence, it’s a great box for those that are on a little bit of a tighter budget, but still want to experience the joy of receiving that box in the mail. With them doing themes, you once again have the benefit of having a rough idea of what’s in store, to know if you want to get that month’s box or not. For those of you that can’t stomach the act of random goodies, well, these just aren’t for you.