Contents of January 2014’s box, as well as my unboxing video are after the jump. 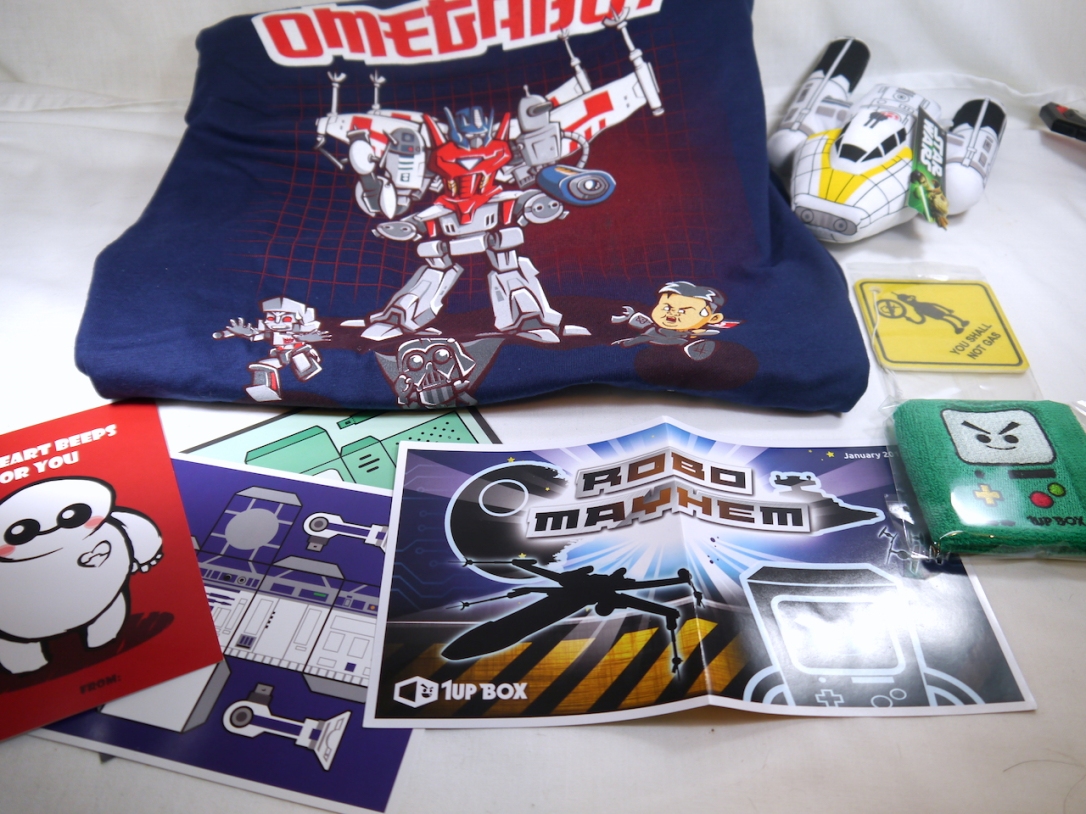 • “Omegabot” T-Shirt
• 1Up Box “Robo Buddy” BMO Wristband
• Ev!l Companions Paper Buddy BMO
• Ev!l Companions Paper Buddy R2-D2
• Baymax Valentine Card
• “You Shall Not Gas” Bender Air Freshener
• Star Wars “Y Wing” Plush
• Robo Mayhem Theme Card Print
• Robo Mayhem Theme Pin
Robo Mayhem was a theme I was looking forward to, being such a fan of robot franchises. Unfortunately this box missed the mark a little bit for me. When I think robots, I think of Transformers, Power Rangers, Voltron, hell even Robo Cop. Unfortunately what we got was BMO from Adventure Time, Bender from Futurama, and a couple of Star Wars references. I’ll admit, the Baymax card is adorable, but not the sort of thing that can turn the box around. To top if off I feel like the value behind this box is severely lessened compared to December’s box. It’s not that I necessarily hate what is in here, it just isn’t as impressive as past boxes. The shirt however is really creative. While I’m not super big on mash-up shirts, this one is so balls to the wall crazy that I kind of dig it. This box just didn’t do it for me. Hopefully things can turn around in February.
As with any of these subscription services, they aren’t for everyone. However, 1Up Box is currently the cheapest box on the market at only $12.92 before shipping. While you don’t get as much as you would in a Nerd Block or Loot Crate, you still more than get your money’s worth. In essence, it’s a great box for those that are on a little bit of a tighter budget, but still want to experience the joy of receiving that box in the mail. With them doing themes, you once again have the benefit of having a rough idea of what’s in store, to know if you want to get that month’s box or not. For those of you that can’t stomach the act of random goodies, well, these just aren’t for you.