To transform into Type Tridoron, Shinnosuke utilizes the power of all of the Shift Cars as well as Tridoron using the Shift Tridoron Shift Car! Shift Tridoron was released in June, 2015 for around ¥2,500. Unlike previous Shift Cars, Shift Tridoron has no flip gimmick, but instead has its own dedicated sounds and LED lights, making it easily the most fun Shift Car yet. Of course, it is compatible with the Drive Driver, Break Gunner, and Trailer-Hou! Unfortunately, due to the long size of the toy, it can not be used in the Mach Driver.

On its own, Shift Tridoron is an elongated version of Tridoron that features a mirror screen on the top of the car. The rear passenger side upper wheel is actually a button. When pressed, Belt-San says “Fire! All Engine!” with a red LED on the screen, illuminating pictures of Cab, Hunter, Shadow, Flare, Spike, Braver, and Doctor. The driver’s side upper wheel is also a button. This one activates the various Tire Kakimazeru (Tire Combinations). The LEDs will change according to which Shift Car is currently being called, matching their color scheme to the best of the toy’s ability. There are two hidden Belt-San phrases in the Shift Car. One is activated randomly during Tire Kakimazeru button presses, while the other is activated randomly during transformation button presses. The combinations are:

Of course, Shift Tridoron and the Drive Driver combo up to create full transformation noises for the transformation and the Tire Kakimazeru functions. However, the noises tend to overlap, and don’t actually match well at all. When playing with the toy, I actually prefer to just use the Shift Tridoron by itself. You miss out on some of the iconic Drive Driver noises, and the initial standby medley (and even the “Drive! Type!” sound), but the end effect is much more pleasing to my ears. If the Drive Driver didn’t keep spinning that wheel and making revving noises, I probably wouldn’t have minded.

Each combination has a unique transformation jingle, all of which sound really fun. Each can also be used to Shift Up as well as initiate the Full Throttle attack, though each one has a standard noise. It’s fun to just sit with the Shift Car and hear the transformation melodies without the need of any other toy. It plays a default “Advanced System!” sound in the Break Gunner. In the Trailer-Hou, it can be used on top to activate the “Tridoron Big Tai Hou”. It can also be slotted in the toy in place of two Shift Cars, having the ability to hit the button twice to immediately activate the final attack.

Overall, Shift Tridoron proves one thing. The Shift Cars as a gimmick would have been HUGE with dedicated electronics. To be able to enjoy the toy’s sounds with no Driver is something special, and with dedicated sounds and lights, it’s just a whole lot of fun. A lot of Drive’s toys have hit the collection bin almost immediately, but this one is definitely going to be hanging out on the desk for a while. Even with absolutely NO OTHER Drive toys in a collection, this one is still absolutely fun. 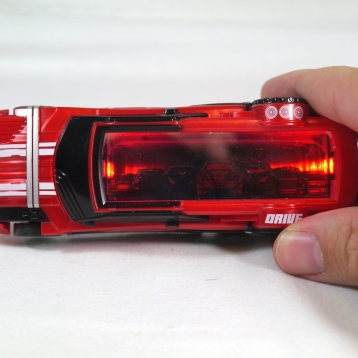 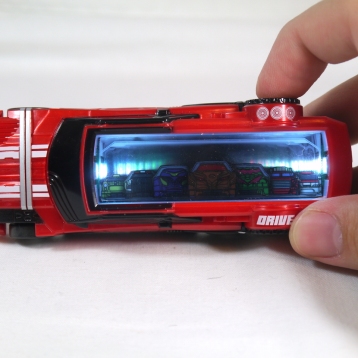 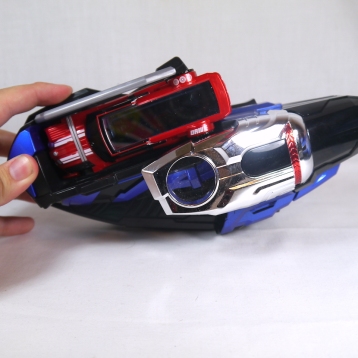