Mega Blaziken & Mega Lucario Figures
$12.99 Each from Toys R Us

Tomy is back with all new Pokémon toy line with quite a few varieties of different figures. Figures available range from the standard static 2″ figures to articulated 5″ figures to battle action 8″ figures with an array of different Pokémon released as well. Here we have the 5″ articulated series debut with figures for Mega Blaziken and Mega Lucario. Each figure features many points of articulation and paint detail. Mega Blaziken is much taller (closer to 6″) while Mega Lucario is shorter (closer to 4″). To make up for the lack of height of Mega Lucario, Mega Lucario includes a beam effect part that can plug into either hole on his hands. Each figure retailed for $12.99 from Toys R Us.

Mega Blaziken is my favorite of the two. Mega Blaziken was fortunate enough to get an S.H.Figuarts release by Bandai’s Tamashii Nations brand, but given the price tag on those sort of figures, this Mega Blaziken is great for $12.99. The figure features articulation in the neck, shoulders, elbow, “wrist”, waist, hips, and knees. Being a taller figure, he doesn’t include any additional pieces. The flame ribbons from his wrist don’t move independently, but still look really nice. With articulation like this, despite being top notch, is great for the price, and well worth the addition to any collection.

Mega Lucario is a bit less impressive, but still great. With no other articulated figure on the market, it’s still worth taking a look at. Mega Lucario features all the same points of articulation as Mega Blaziken, though given his small footprint, it’s much harder to get Mega Lucario in a decent pose. Mega Lucario also has a ball and socket joint in his neck, so his head can get quite a bit more angles that Mega Blaziken’s swivel just can’t get. To make up for the small size, Mega Lucario includes a beam effect part that can plug into the hole on Mega Lucario’s hands. It’s not a bad thing to include, but because of it, Mega Lucario’s hands are stuck in a slightly bent position to compensate for the beam, meaning his profile looks a little strange.

Overall, both figures are pretty great for the $12.99 price point. There is room for improvement, but the complaints are minor and the pros are abundant. With Tomy’s previous line being so heavy in the small 2″ figures, it’s great to see some quality 5″ articulated figures for suitable Pokémon. I look forward to venturing into the larger price points and checking those figures out too. 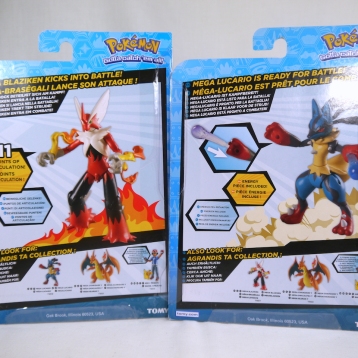 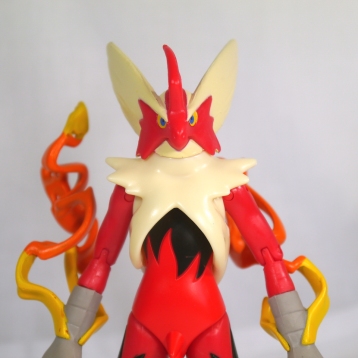 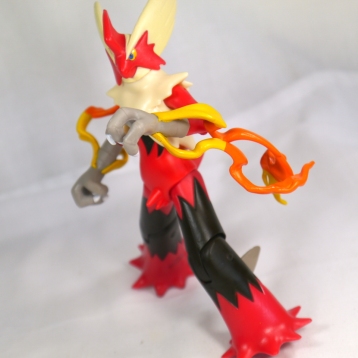 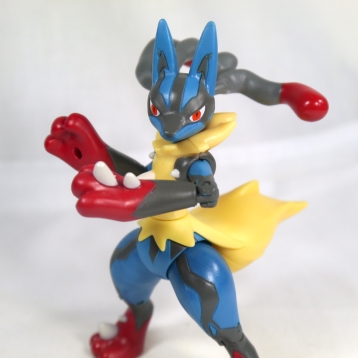 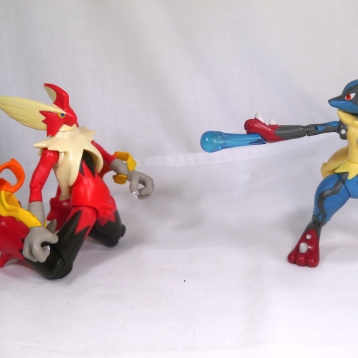 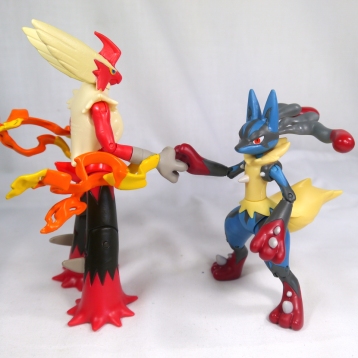