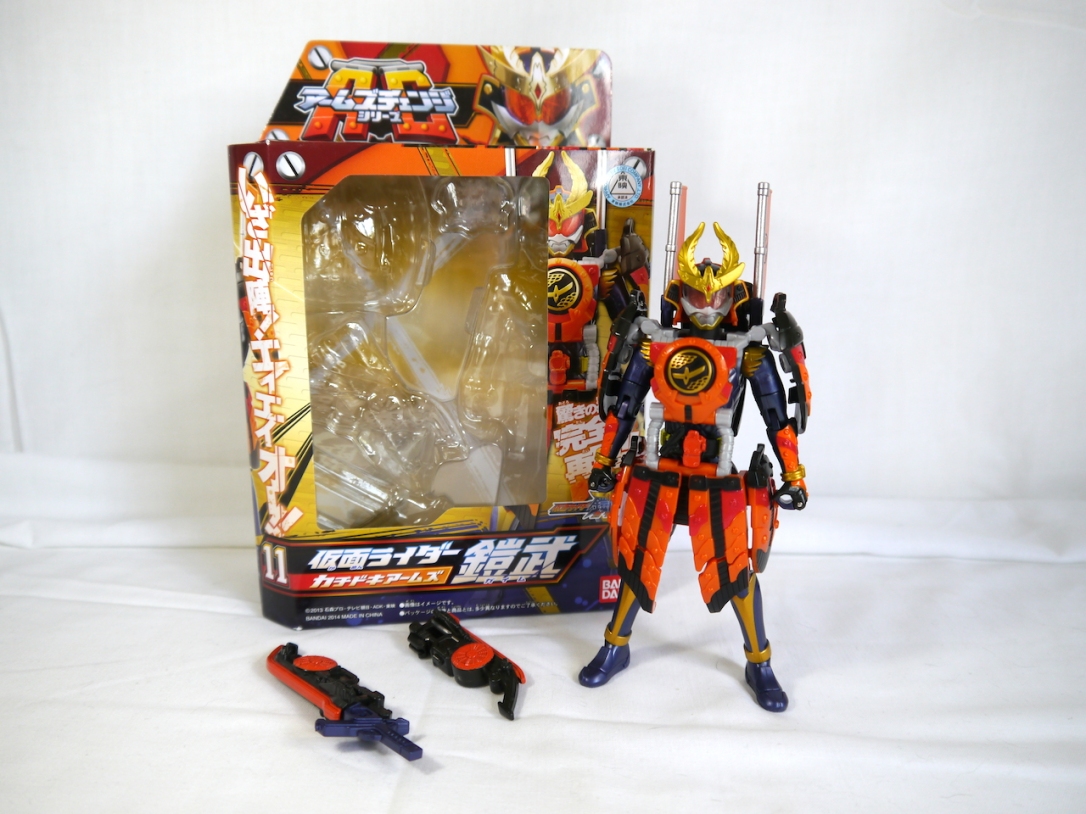 Gaim continues to power up, this time into an all new, triumphant set of arms: Kachidoki! The eleventh entry into the Arms Change line was released in April, 2014 for the slightly  higher price of ¥3,200. Given the new molding of the base figure, as well as the bulky armor, the small price hike is to be expected. Arms Change 11 includes Kachidoki Gaim’s base body, the Kachidoki Arms, two war flags, the DJ Gun, the DJ Gun in sword mode, and the Musou Saber. The base figure is the Gaim we know and love, but with an all new head sculpt and gauntlets to reflect the change to Kachidoki. This makes the base figure itself look weird with other armor (as it will always have the Kachidoki gauntlets), but still gives you the option to Arms Change, which is what the line is all about. It may look weird, but it’s still fun. The Kachidoki Arms, despite being bulky, ends up making a nice fruit mode, but the real gem is the transformation into armor. While difficult at first to go back and forth, once you get the hang of it, it’s a pretty easy task. The armor slides on like any other, and folds down to cover the entire front of the figure. The bulky armor limits the poseability, particularly in the legs, but this doesn’t stop the figure from shining. It looks imposing, strong, and just incredible. Even without the epic headcrest, the armor looks great on other bodies, and I really like the way it looks. The DJ Gun is neat. I love the weapon itself. However thanks to the way the handle is designed, the claw like hands of the Arms Change figures have real problems holding the weapon comfortably. The Musou Saber is an unpainted version of the one included with Gaim and Zangetsu, and can be slid into the DJ Gun in Sword Mode to create the Taiken Mode. It’s worth noting that Daidaaimaru and other weapons can plug into the Musou Saber Handle to create even more weapon combinations. Unless Kiwami is amazing, this is probably the one to buy. But given the gimmick of the Arms Change figures, getting one is just silly. This is a great addition to the line, and the awesome look of the Kachidoki armor is something any collection needs to add a little power.