To push play even further, the Imaginext line offers bigger Zords and figures at a $19.99 price point. One of these releases is an upscaled Goldar figurine, complete with a small figure-sized Rita Repulsa. Goldar himself features two different action features, as well as his sword. Need something for your Zords to fight? Look no further.

Just by looking, you can tell Goldar is an upscaled mold of the figure (to be released later on in the line). I’m actually not sure if this is something that Imaginext has ever done, but they certainly pulled it off well. It retains the swivel in the hips, as well as the pin and swivel system used on the smaller figures in the shoulders. Despite his right arm having an action feature, it is still moveable with this joint. Unfortunately, due to Goldar’s weird head, his head can’t move. Speaking of his head, Goldar retains his iconic look, done in a more childish cartoon style to match the other figures in the line. Most of his key jewels are all painted in, as well as the wings and tail. Even the sword is painted more than any Bandai America figure weapon released as of late. It fits in the hand comfortably and looks perfect in terms of scale.

As mentioned previously Goldar has two different action features. By tilting the pad clockwise, Goldar’s right arm will raise up and down slightly, for a sword slashing gimmick. It ultimately just looks like something else and isn’t that effective. By tilting the pad counter-clockwise, Goldar’s collapsed wings will spring open. The wings extended look really impressive. Even with his cartoonish look, he looks great on a shelf. Goldar scales perfect with Bandai America Megazords, so if you or your kids collect those, this Goldar gives them something to fight, even if the artistic style is different. Obviously it makes a great enemy for the Imaginext Zords.

The Rita figure included is questionable. In promotional sketches of RIta used by various coloring books and toys back during MMPR’s run, Rita was often colored with a purple dress, instead of her usual brown. This figure takes cues from those sketches, being cast in purple plastic. Her head sculpt is pretty basic, not really resembling Rita at all. Thankfully her headdress is a separate piece that slides down over her head to complete her look as best possible. While I’m satisfied with this Rita, I hope we get a more accurate release later in the line. This Rita almost seems too NICE to be Rita.

Overall, Goldar just isn’t as thrilling as the Tyrannosaurus. I will retain that it is a great item for kids in this line, as it gives the figures and Zords someone to fight. Goldar himself looks nice for what he is, though I have trouble thinking most adult collectors will be into this release. Regardless, a fantastic pick up for kids and worth the look for Goldar fans. 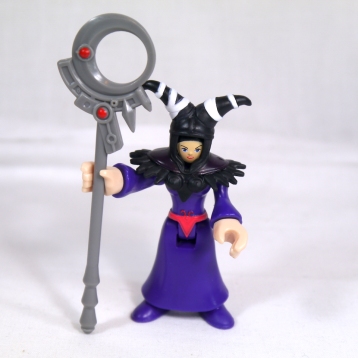 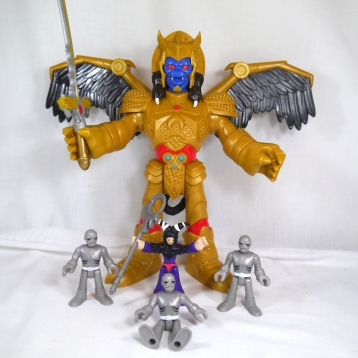