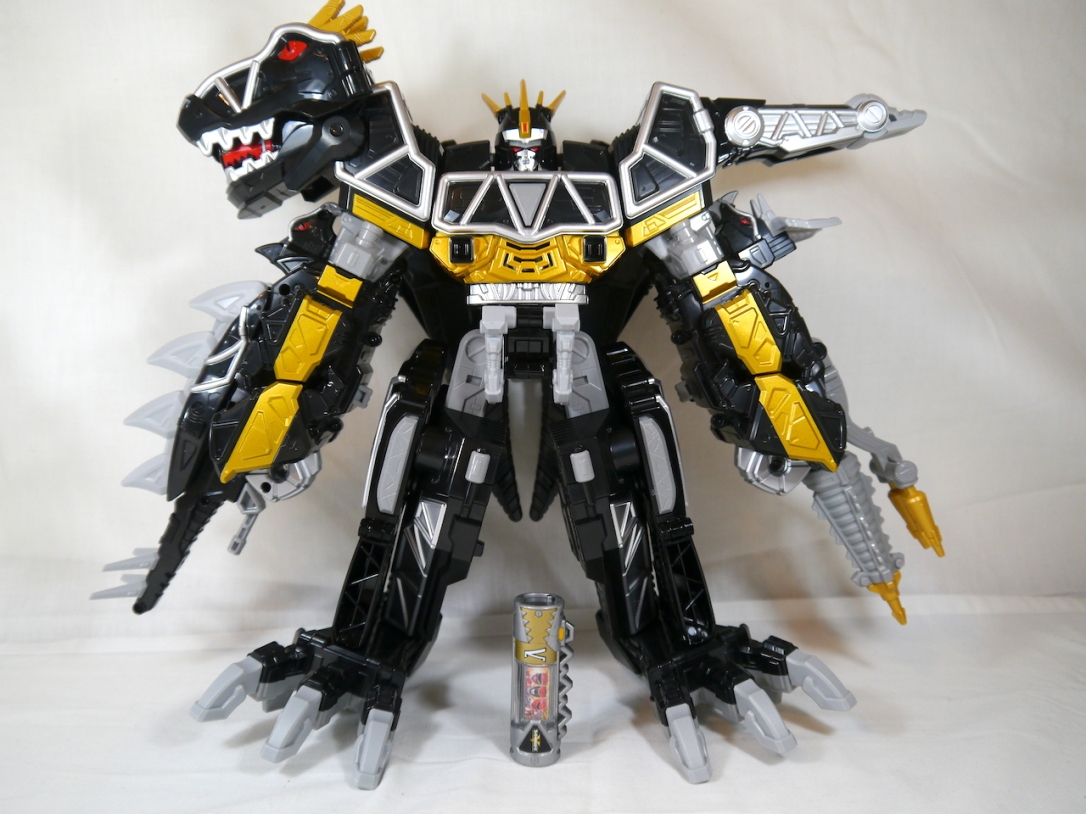 Unfortunately Kyoryuzin Dark is sold out at most retail locations. Happy Hunting!

The last time we received a black and gold repaint mecha was Boukenger via a special edition Ultimate Daibouken, followed by a black and white version of Gunbir-Oh from Go-Onger. In a nutshell, it’s been a while, and to top it off, they’re usually either lottery items, or store exclusives. Kyoryuger is taking names and breaking records with its toy line, and Kyoryuzin Dark Version being a run of the mill (albeit limited in supply) release proves it. Kyoryuzin Dark made his way onto store shelves in November, 2013 for ¥8,500, ¥700 more than the normal Kyoryuzin for some reason or another. Included in the box are dark versions of Gabutyra, Stegotchi, and Dricera, along with Deboth In versions of the Gabutyra, Stegotchi, and Dricera Zyudenchi. Trailers of the Kyoryuger vs. Go-Busters film make it look like the Dark Zyudenryu will be making an appearance! Included is the Super Sentai Zyudenchi, with Tyranno Ranger, Abare Red, and Kyoryu Red in the battery area, with the typical red outline on the unactivated side. While the Gaburevolver, Giga Gaburevolver, and Gabutyra de Carnival all say the usual “Super Sentai!” phrase, the Zyudenchi lets Gabutyra or Gabutyra Dark say the names of every single Sentai team! A long, but awesome sound effect. Being a repaint of Kyoryuzin, Kyoryuzin Dark isn’t much in the way of new. All three Zyudenryu are now black and gold with red eyes, to pretty much show they’re evil and mean business. While it’s not a new toy, it is at least appearing in a movie, and looks GREAT on display. Raiden Kyoryuzin Dark looks impressive to say the least. While other combinations will look a little goofy with their color clashing with the black and gold color scheme, it’s still compatible, and still fun to do. While most collectors will probably pass on this, it looks so great together that I can’t help but mark it as my favorite in the line. I’ve always been a fan of these black and fold repaints, and this one is a real winner. Same design and functionality as Kyoryuzin with an all new, sleek color scheme. The lack of a new soundboard to give it a more dark sound set is a little disappointing given he costs more, but I can look past it seeing as how I’d stop caring about the sound set once he enhabits my displays. The Super Sentai Zyudenchi is pretty neat, and while I’m bitter at the two Dino Sentai for invading my Go-Busters reunion, the Zyudenchi itself is really neat, and packing it with this guy was a nice incentive for Zyudenchi collectors to pick this guy up. If you see it, buy it, you shouldn’t be disappointed.