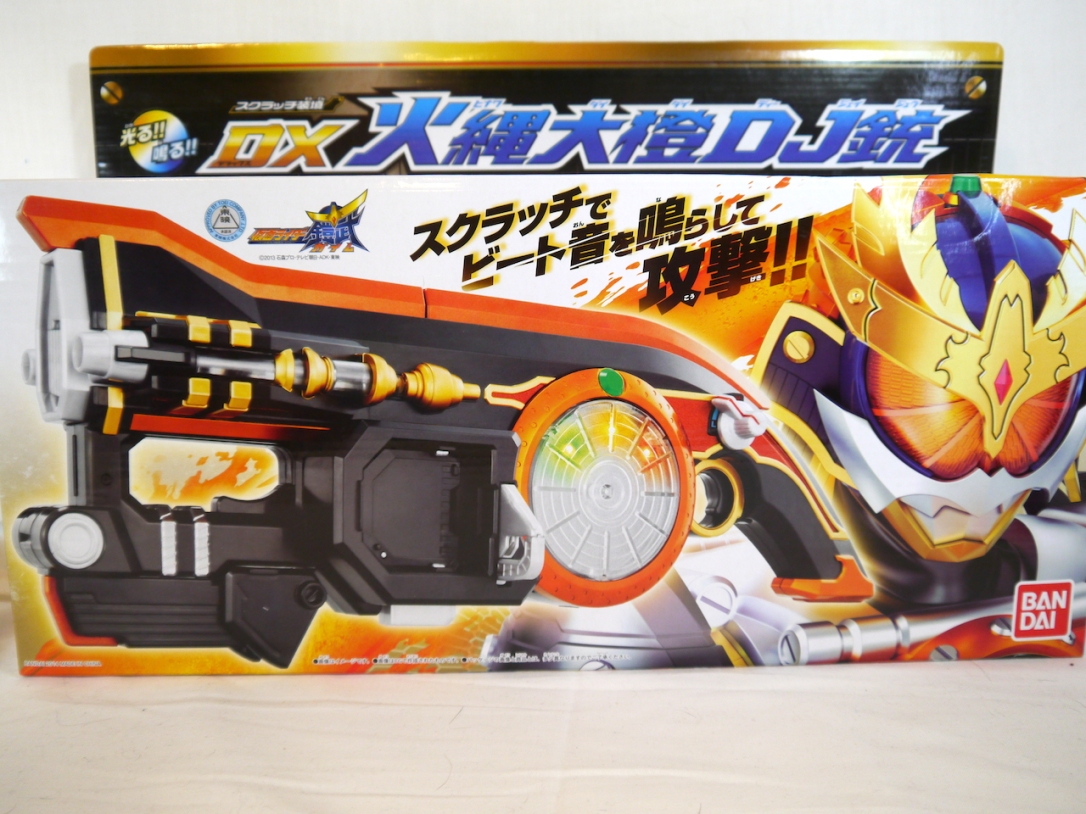 Every new Arms brings a new weapon, and belonging to Kachidoki Arms is none other than the Hinawa Daidai DJ Jyuu, which is basically something like “Matchlock Great Orange DJ Gun” or something of the like. For the remainder of this post I’ll be saying “DJ Gun” since “DJ Jyuu” can sound mildly offensive to Jewish DJs. It was released in March, 2014 along the Kachidoki Lock Seed. The gun is an impressive size, clocking in at roughly 15 inches long and is actually quite hefty. The toy has one main firing sound, and three alternate final attacks after you scratch the DJ Table depending on the dial’s speed. Low is a cannon attack, Medium is a shotgun attack, and High is a rapid fire machine gun like attack. The standby beat also goes slower or faster depending on the selected speed as well! Inserting the Kachidoki Lock Seed (or any Lock Seed) will initiate the finisher for the weapon, which creates a new standby beat and three more finishing attacks, one for each speed. Swinging the front lever down lets you slide the Musou Saber into the chamber of the gun to transform it into the Taiken Mode, or Big Sword Mode. This formation clocks in at an impressive 24 inches long. The Musou Saber’s sounds can still be played by the trigger of the sword, but no lock can be inserted into the Musou Saber, as there is no clearance for the bar portion of the Lock Seed. The trigger on the sword handle of the DJ Gun will initiate two sword sounds. Insert a Lock Seed to start the count up to an “Unmeasurable!” number, and press the DJ Gun’s sword trigger for a new final attack. With such a wide variety of attacks, sounds, and functions, the DJ Gun is easily the best Gaim weapon to date. If you have the Musou Saber, picking this up is a no brainer, as it adds some great things to both items by owning both. Even if you don’t own the Musou Saber, the DJ Gun is great on its own, and well worth the price.