Loot Crate, like Nerd Block, is a monthly subscription service. For $13.37 per month (get it? 1337. INTERNET JOKES!) plus $6 shipping (with three and six month plans as well to save a little money) you receive a box filled with a number of themed “geek and gamer” items supposedly retailing for over $40. Shirts CAN be included, but aren’t necessarily included every month. When they are, the print is exclusive to Loot Crate and can be found nowhere else. Loot Crate also includes a collectible pin and book detailing the theme. The book also has articles and interviews related to the theme as well. Each month carries a specific theme that usually matches something happening in pop culture. For instance, one month was “Titans” dedicated to items based on Attack on Titan and Titanfall. When the Xbox One and PS4 were releasing, the box was “Console Wars.” It’s actually pretty neat. Like Nerd Block, Loot Crate selects one subscriber to receive the “Mega Crate” containing over $750 worth of prizes. While you never really know what’s inside, the franchises are usually easy to guess based on the theme and hints dropped by the Loot Crate crew.

Contents of May, 2014’s Loot Crate, as well as my unboxing video are after the jump. 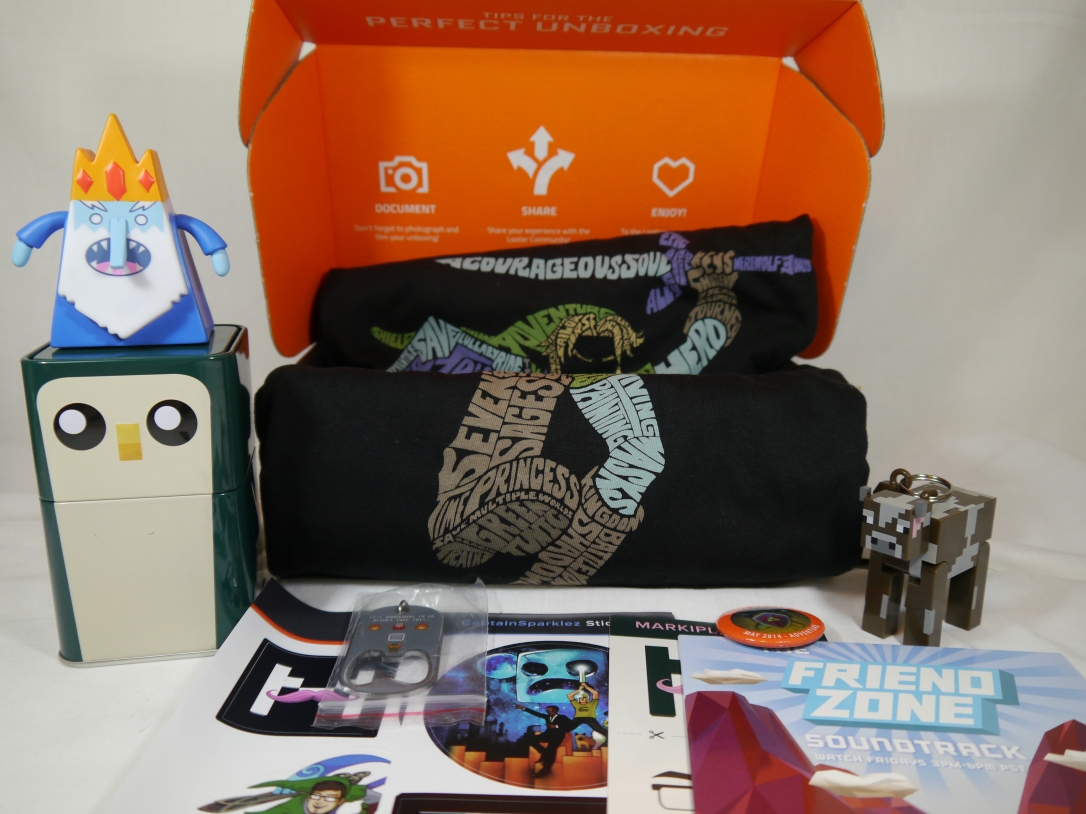 Last month’s Loot Crate was pretty great, filled with franchises I love (Game of Thrones and Elder Scrolls). Knowing that this month’s theme was Adventure, and Legend of Zelda was involved, I didn’t really care about a whole lot else. It was said that Adventure Time and Minecraft were both involved. To be honest, I’ve hardly seen Adventure Time, and I don’t get the appeal of Minecraft whatsoever. That being said, what we did get was really neat. The shirt is incredible. I’ve always been a fan of these typography shirts, but never bought one. Really glad my first one is from one of my favorite franchises. The bottle opener, being Zelda themed, is really awesome. I don’t really drink any beverages in which I would need it, but I like it for what it is. Regarding Adventure Time and Minecraft, while I’m not a fan of either franchise, I like the characters I got, so I’m happy about that. The Maker/Polaris stickers and such don’t do a whole lot for me. I get that they are gaming channels (and I really love JWitz!) but given the theme was supposed to be adventure, throwing in advertising for some gaming YouTube channels doesn’t quite make sense to me. I’d rather have seen other Zelda, Adventure Time, or Minecraft items. I haven’t listened to the soundtrack yet, so hopefully that is cool at least. As always, the pin is a cool addition. It’s a shame the magazine is digital only this month. The e-mail mentioned being digital and physical, so I figured it was going to be both. It certainly would have helped figuring out all the YouTube people I don’t know.

As with Nerd Block, these are NOT for everyone. While it’s easy to peg what franchises are included based on the theme and images, the items you are getting are still random. However, at only $13.37 before shipping, the price is a bit easier on the wallet (plus shipping is $4 cheaper than Nerd Block thanks to Loot Crate being US based). Plus when you get a crate with a shirt included, the deal is just unbeatable. Really a great deal.