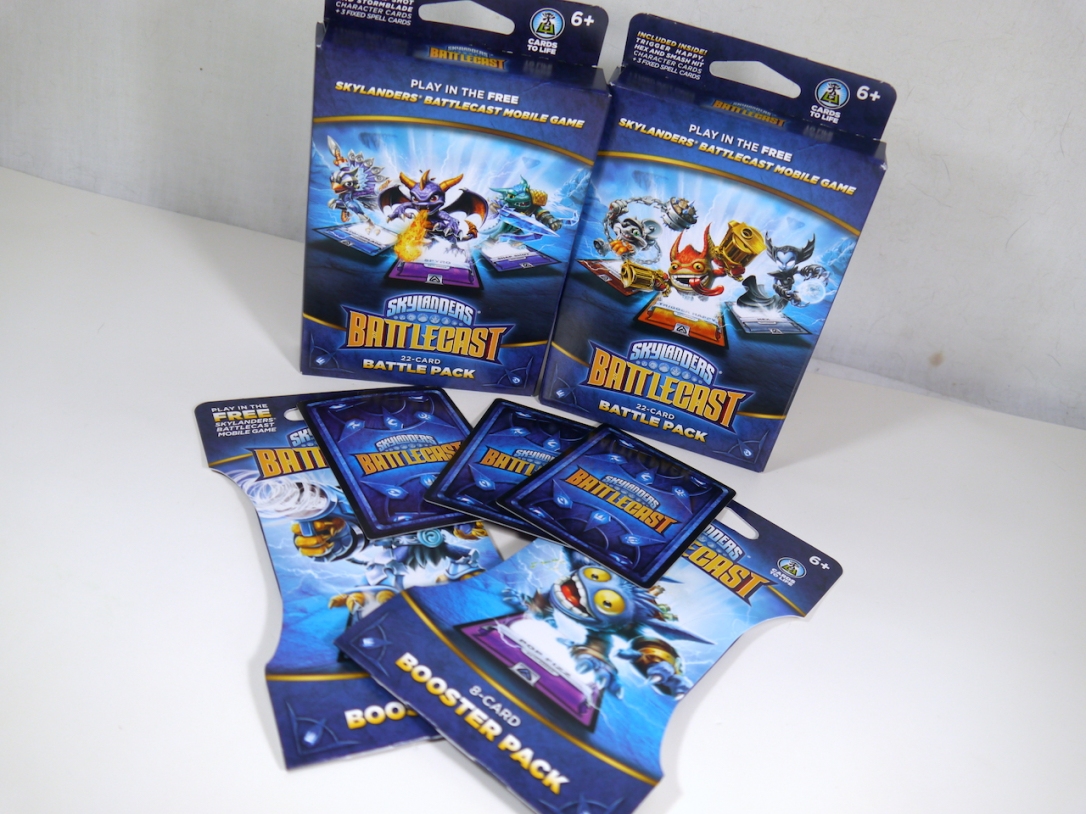 Skylanders Battlecast is an all new game developed for mobile platforms that mixes the gameplay of a game like Hearthstone with the world of Skylanders. While that definitely sounds like a fun game in general, what if you could buy the cards physically too? That’s Skylanders Battlecast. Fans can buy physical 8-card Booster Packs and 22-card Battle Packs at their favorite retailers. Each card has a UNIQUE dot pattern surrounding the card that can be read via your device’s camera and imported directly into the game. Purchased cards look identical to those in the digital game, so fans that want a more physical approach can build and replicate their digital decks physically as well, for two ways to play.

Booster Packs contain eight total cards that come in four rarities (Common, Rare, Epic, Ultimate). Cards also can have silver or gold holofoil variants that unlock Level 10 and Level 20 versions of the digital cards respectively. The 22-card Battle Packs contain six predetermined cards based around three different Skylanders in each pack, with 16 randomly selected cards. Battle Packs also contain a deckbox to hold a 3o card deck, as well as a Trading Shield. Trading Shields allow people to photograph or video their cards without the risk of someone scanning it in for themselves. Each card has a unique code, and can only be attached to one Skylanders Battlecast account.

The game itself plays a lot like Hearthstone, but players have a team of three Skylanders at their side. Each player builds a deck with Spells, Gear, and Relics. Spells are used to attack enemy Skylanders or villains. Gear can power up an individual Skylander. Relics effect the entire team to boost their strength, health, or the player’s abilities. Each player starts with one crystal, and gain 0, 1, or 2 crystals at the end of every round. These crystals are used to pay for the cards players use. On top of attacking with any number of spells, the frontline Skylander can attack the enemy for a marked amount of damage. The player that loses all three of their Skylanders is the loser.

The art on the cards is pretty neat, and the mechanics are super easy to learn for Skylanders fans of all ages. For fans that don’t want physical cards, players can purchase in-game coins to buy digital Booster Packs, or earn Booster Packs by completing daily challenges. No matter which way you take your Battlecast journey, the game is pretty interesting, and a nice change to the Skylanders formula that is arguably getting a bit stale. As a fan of Hearthstone, and an old fan of Skylanders, it’s a game that certainly interests me in the long run. I like it a lot.