Contents of February 2015’s box, as well as my unboxing video are after the jump. 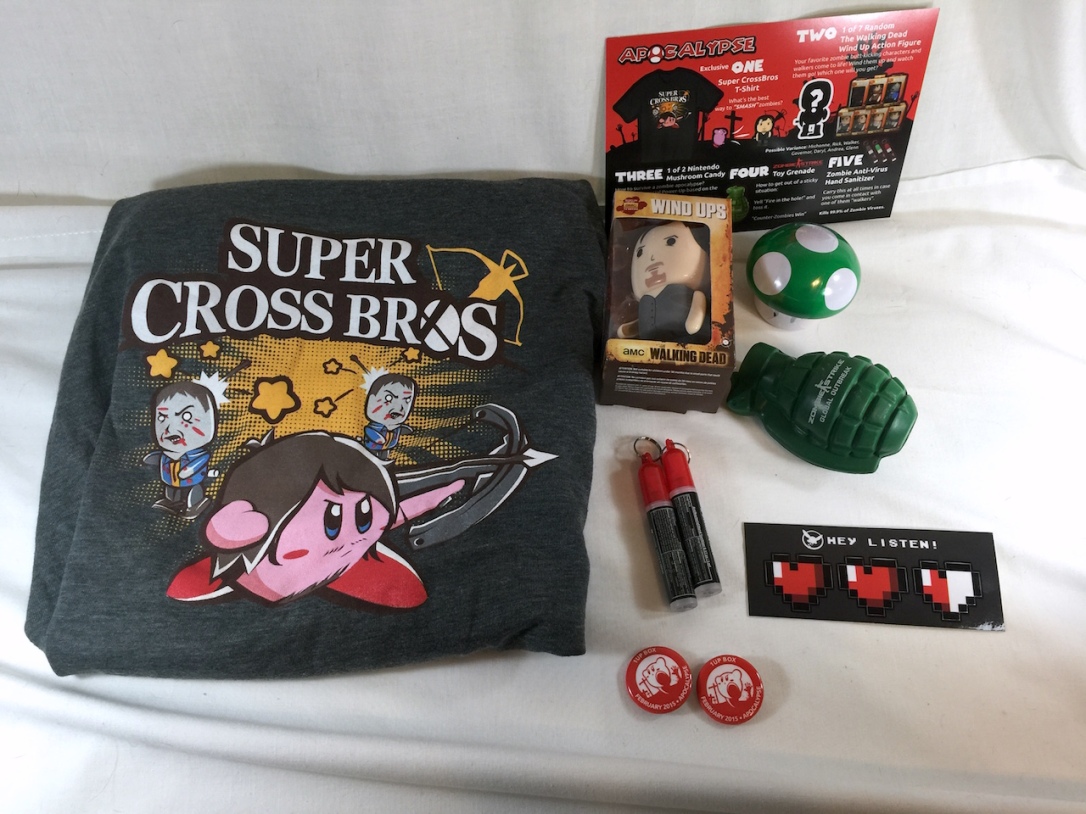 • “Super Cross Bros.” T-Shirt
• The Walking Dead Wind Up Action Figure (Daryl)
• Nintendo Mushroom Candy Tin
• Stress Toy Grenade
• Zombie Anti-Virus Hand Sanitizer
• Apocalypse Theme Card
• Apocalypse Theme Pin
The first thing I pulled out of this box was the shirt, and being a mild fan of The Walking Dead and a huge fan of Smash Bros., I was definitely intrigued by it. The Walking Dead wind up is neat in a weird vintage sort of way. Though I kind of wish I had gotten a walker just so some of my other figures could get chased by it. I had seen the Mushroom Candy Tins before, and I believe I own the Super Mushroom, so I’m glad I ended up getting the Life Mushroom. Stress toys are always sort of fun, though in theory how effective is a grenade in a zombie outbreak? It’s single use and only takes out a few of many. Anyway, the anti-virus hand sanitizer is pretty cure. I don’t really use sanitizer much since I’m washing my hands often, but the effect they were going for is kind of neat. Overall, as much as I really love 1Up Box, if I had paid for this box I’d probably be a bit disappointed. However the shirt really won me over this time, to the point where I’m overall okay with the rather mediocre outcome. If there’s one thing 1Up Box excels at, it’s the really creative shirts.
As with any of these subscription services, they aren’t for everyone. However, 1Up Box is currently the cheapest box on the market at only $12.92 before shipping. While you don’t get as much as you would in a Nerd Block or Loot Crate, you still more than get your money’s worth. In essence, it’s a great box for those that are on a little bit of a tighter budget, but still want to experience the joy of receiving that box in the mail. With them doing themes, you once again have the benefit of having a rough idea of what’s in store, to know if you want to get that month’s box or not. For those of you that can’t stomach the act of random goodies, well, these just aren’t for you.