Hey everyone! Time for a new batch of S.H.Figuarts news, but before I begin, let’s take a glance at the release list as of now:

Your wallet crying yet? I know mine isn’t, as I removed all tear ducts from my wallet after an argument one day, but I hope everyone’s sanity is still in tact, let’s get on with the news!

N•Daguba•Zeba, the big bad of Kamen Rider Kuuga, is a Tamashii Web Exclusive, at a price of 3,675¥. Interestingly enough, his banner indicates he was supposed to be announced on February 26th, the same day as Growing Form. Evidently something happened to prevent this and pushed him to a July release instead of June. Thank God. Oh, look! My wallet is attempting to cry but it can’t. How adorable.

Next up, RoboArts, a section of the Tamashii Site, has listings for unannounced Figuarts, within these listings are July’s listings, and here they are. There is one listing for Dragonball Kai. This can easily be picked as Gohan, as his prototype just popped up in Magazines, and it was pretty much assumed he was the next release. Next, there are two listings for Kamen Rider W. One is most likely the Luna Set, and the other is most likely Accel. As I’d love to see Nasca pop up this fast, I highly doubt it. There is also one listing for Agito that I can only assume is Exceed Gills, who I figured was going to be an exclusive but clearly isn’t.

A few days ago we also got pics of this guy: 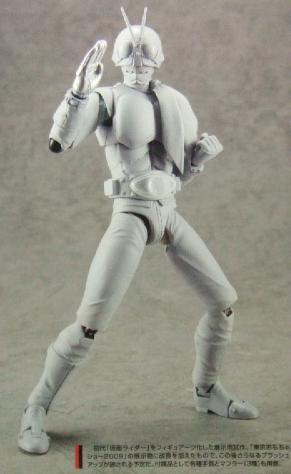 Up there is the S.H.Figuarts release of Kamen Rider Ichigo. Apparently, HJU’s resident Ichigo experts confirm this to be his “New” Rider 1 design, so he will be in the Silver, Blue, and Green body style seen in the later half of the original Kamen Rider (ie: Not the colors used in The First).

Well, that’s all the damage I’m going to do for today (unless more stuff is announced…) everyone make sure to give your wallet a good hug today!